Vestments are the beauty of worship, Part 2. 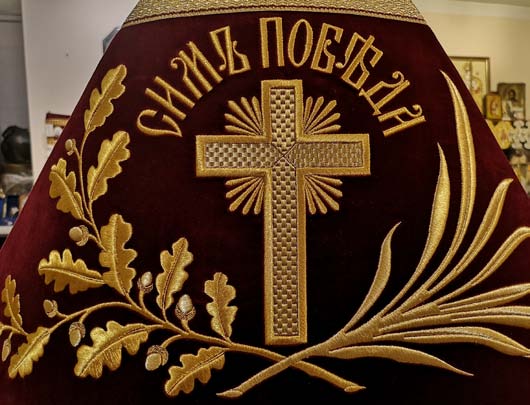 What vestments to choose for different seasons and what are the advantages of a phelonion with a standing mantle? For what period of the liturgical year are robes made of multicolored fabrics intended? We continue our conversation with Grigory and Natalia Nasibulov, heads of the Aksamit workshop

– Do you work in the technique of manual or machine embroidery?
– Basically – machine. But machine embroidery can hardly differ from manual embroidery. Usually, with machine embroidery on the computer, a certain segment is selected, for example, a hand, and it is filled. But you can draw every stitch. This is a very painstaking work, comparable in time to hand embroidery, but the result is worth it.

– In the assortment of fabrics of the Aksamit workshop, you can see multicolored options: for example, gold brocade with red and blue flowers. For what period of the liturgical year are they intended?

– Before the revolution, there was no such clear division of vestments by color as we are used to today. In the sacristy of the Church of the Resurrection of the Word at the Danilovskoye cemetery, which was not closed during the Soviet years, I saw many old vestments brought there from different churches, including the Cathedral of Christ the Savior. There were also multicolored vestments, for example, a phelonion of buried purple velvet on a gold background, in which they served on ordinary Sundays, not only for fasting. In one of the museums in Yaroslavl, at an exhibition dedicated to the merchants Olovyanishnikov, we saw a blue and silver vestment, on the shoulder of which was depicted St. Nikolay. We serve in the days of the saints in yellow, and in blue on the Mother of God. And there – please! Finally, in Greece, in Bulgaria, and today they serve in multi-colored vestments. So it can be assumed that the tradition of strictly adhering to the correlation of the colors of the vestments with the periods of the liturgical year was formed not so long ago.

– Actually, there are different historical versions regarding the tradition of serving on Easter in red vestments. A little more than a hundred years ago, on the Resurrection of Christ, they served in white vestments …

– Some associate the transition to red vestments with the vestments that were sewn for the churches of the Russian Empire for the 300th anniversary of the House of Romanov, – the anniversary was just celebrated in May. On the shoulders of these light burgundy vestments were embroidered a cross, palm and oak branches and the inscription: “This is victory.” I first saw such vestments in the temple of the Great Ascension when I was young, when I served there as an altar boy, and I really wanted to repeat it. There were “Romanov” vestments both in the Cathedral of Christ the Savior, and in many other churches throughout Russia – they were ordered specially for the anniversary celebrations, funds were released from the treasury. We made their remarks more than once, the priests appreciated them.

– What vestments would you recommend to priests for a hot summer?

– In the heat, they usually take vestments without lining. In the old days, priestly vestments could weigh up to 20 kg, apparently, people were stronger then, but now light fabrics are becoming more and more in demand. Not necessarily linen: both silk and modern polyester, which is similar to cotton, are good. The vestment can be completely without a metal thread, while it is very voluminous, perfectly holding its shape. We have a fabric from Italy that looks like it is covered with lace – the priests really like it. The good thing about Italian fabrics is that they are mostly natural.

– Some priests on the Internet are against the standing shoulder …

– This is a debatable question. Many priests rejoice that, thanks to the high mantle, the Russian phelonion is well ventilated. A priest I know who served in Australia for many years says it’s easier in the heat with a high shoulder. It can be made softer, harder. For this, special non-woven materials made from cotton fibers are used. The vestments have three symbolic meanings: the royal robes of the Savior, military armor and the Holy Sepulcher. The high mantle of the phelonion bears all this symbolism. In addition, in winter, the mantle protects the priest from the cold, which has always been relevant for our northern country. This is probably why it entered Russian church use.

“The vestments have three symbolic meanings: the royal robes of the Savior, military armor and the Holy Sepulcher. The high mantle of the phelonion bears all this symbolism.”

– You recently visited the sacristy of the Milan Cathedral.

– It was a miracle! Literally by chance, we met our friends in Milan, whose acquaintance turned out to be the sacristan of the cathedral (a former policeman, now a Catholic monk). It was he who led us to the sacristy, and showed us what tourists usually do not see. We were, of course, amazed at how clear and thoughtful everything is, how carefully the vestments are kept. For example, we saw that it is better to store them horizontally. Vestments of the 17th century are in special semicircular drawers of the “carousel” type, arranged with paper and cloth – a useful example of the handling of vestments. For example, they have preserved the vestments in which Pope Pius 9 crowned Napoleon. We also once had such a scrupulous attitude. For example, at one time I was struck by the pre-revolutionary vestments from the Cathedral of Christ the Savior, on which there was a label: wardrobe such and such, shelf such and such.

– Do Italians serve in old vestments?

– Not often. The Pope ordered the services to be performed in the most modest vestments, from simple fabrics, without adornments – they say, so closer to the people. We also see this tendency sometimes, but there it became mandatory. But vestments and utensils are the beauty of divine services!